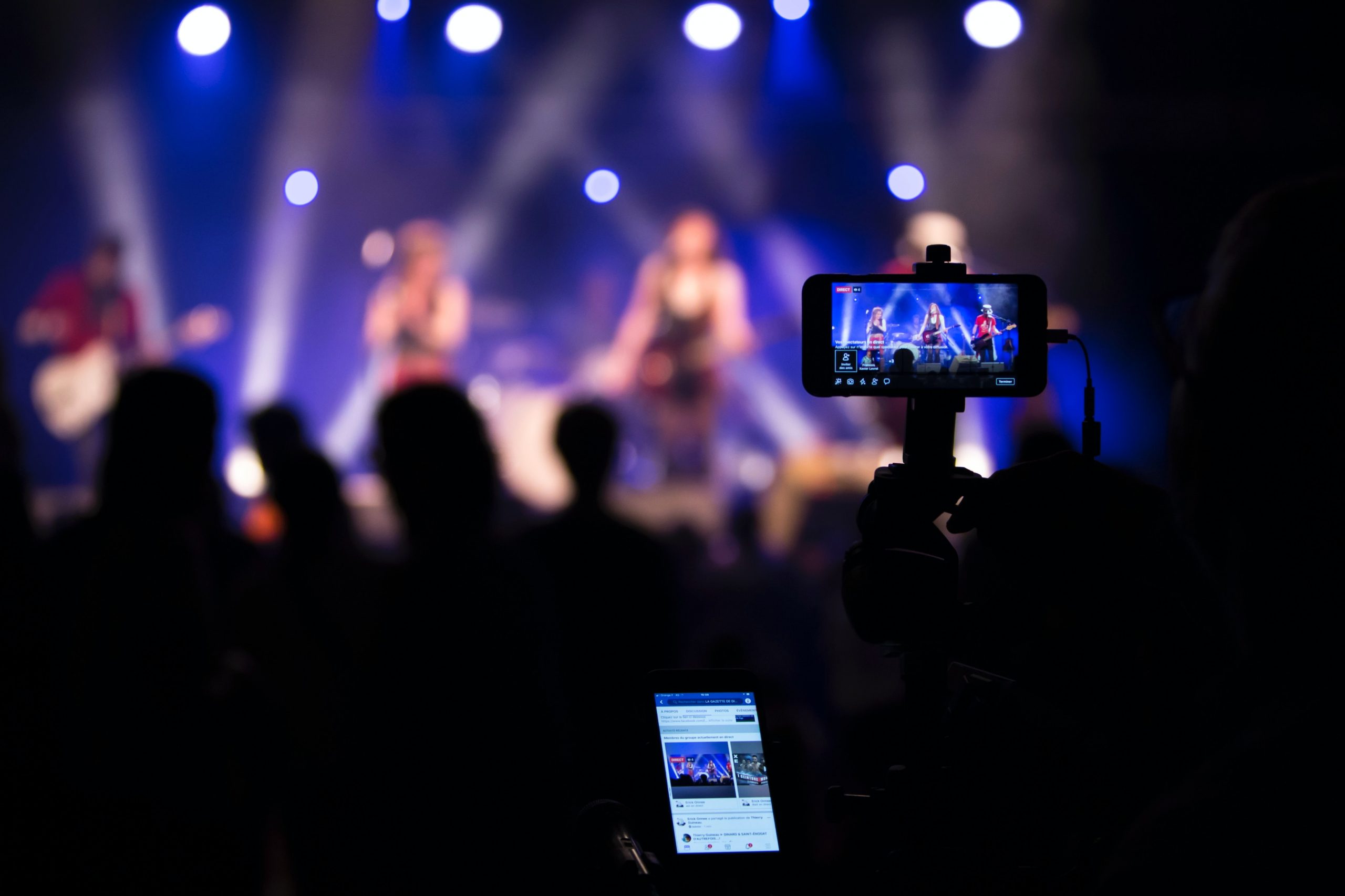 Live streaming has taken the world by storm over the last few years. As smartphones have become powerful enough to handle this sort of task, social media users and influencers across the globe have been fighting to take their slice of the pie. And the live video streaming statistics are there to prove it.

While the first internet live streaming event happened all the way back in 1993, when a group of Xerox PARC engineers decided to test some new technology at a corporate show, it has only really taken off over the last few years. This is thanks to increasing internet speeds, network availability, and a new generation of content creators and marketers.

Looking at the stats and facts can provide an eye-opening insight into this modern and popular media, so let’s dive in.

People have been watching live video all over the world for quite a while now. The internet has opened the doors to a new breed of personalities, though, with live streaming spearheading the latest wave of entertainment.

1. In Q1 2019, more than 3.4 billion hours of content were streamed on the top three live-streaming platforms.

This is a very long time! Around 388,127 years, in fact. Of course, when this is split between huge groups of people, it’s not quite so difficult to amass such figures. Still, it’s quite remarkable that Twitch, YouTube Live, and Mixer have managed to achieve this.

2. As many as 44% of people watch less broadcast television thanks to live streaming.

Live streaming has changed the way a lot of people consume entertainment. As many as 44% of the internet’s users watch less broadcast television thanks to live streaming, with millions of people tuning in to watch their favourite streamers, personalities, and influencers.

It would be hard for websites like Twitch and Periscope to stay afloat without a lot of users tuning in to their content. The user bases of these sites are always growing, and this isn’t set to stop any time soon, live video streaming statistics confirm.

3. On average, a Twitch user will spend more than 95 minutes watching live streams each day.

Some avid Twitch watchers will sink hours of their day into viewing their favorite streamers, though the average is more like an hour and a half. This is quite a considerable daily watch time stat, with the average American watching just shy of four hours of TV each day in 2017.

4. Beyoncé’s 2018 Coachella performance is the most live streamed event in history, with more than half a million viewers tuning in at the same time.

With live streaming starting with a musical performance, it’s only fitting that the most watched live streaming video falls into the same category. People love Beyoncé, so it’s no surprise that her 2018 Coachella performance gathered a peak of more than 500,000 viewers. A sweet dream or a beautiful nightmare? It’s up to you to decide…

5. 65% of young people prefer to consume live sports content on a mobile device.

There are a lot of devices used for live streaming video nowadays, though few are as popular as the mobile phone. Smartphones have gained huge amounts of power over the last few years, and it’s no surprise that nearly two-thirds of young people prefer to live stream sports on their phones instead of other devices.

What kind of people watch streams and what they have in common can be incredibly insightful. Businesses across the globe are working feverishly to use this information to improve their marketing, and this can prove to be very successful.

Businesses have long thought of blogs as one of the best tools at their disposal to reach out to new customers. In reality, though, eight in ten online shoppers would prefer to watch live streams rather than read blogs. This isn’t to say that blogs aren’t useful, though.

Live streams have been on the rise for many years, and the content you’ll find on the most popular platforms is incredibly diverse. This has lead to the vast majority of internet users viewing more live streams in 2016 than they did in 2015.

Twitch is one of the most popular streaming platforms on the internet, and it’s mostly associated with video games. The side has more than 15 million daily active users, including both consumers and content creators.

Broadcasters make up for a huge portion of Twitch’s user base, with more than two million users streaming their own content each day. Most streams won’t get many viewers, but they all help to keep this giant move forward.

Thanks to all of the organizations watching this field, it’s not too hard to find live stream viewer demographics information. Twitch’s main demographic is male, with 81.5% of their users falling into this category. Many of the content creators also being male.

This is quite a broad range, but it still serves to show who the content on this site is geared towards.

There are a lot of streaming platforms available on the Web. While many of these are small and still trying to find their feet, there is a select group of giants in this space. These companies drive the market forward. At the same time, they can also make it harder for new faces to appear, online streaming media statistics suggest.

12. More than 17% of US internet users say that Facebook Live is their favorite platform for live video.

Social media is the perfect place for live streaming, and many users agree. According to social media live video streaming statistics, 17% of internet users in the US favor Facebook Live over any other streaming platform, whether they’re watching famous influencers or their friends and family.

13. Over 100 million Instagram users watch or record live video on the platform each day.

Instagram is one of the largest social media platforms in the world, with over 1 billion monthly active users. One-tenth of them watch or record their own live video through the platform each day, and all of this is done on mobile devices.

Facebook is even more popular than Instagram, though it isn’t quite as rich in live streams. In 2018, Facebook reached a milestone of 3.5 billion live streams. This is still a very significant number, and Facebook is a growing force in this space.

Periscope is popular with a different market than Twitch and Facebook Live. The site is owned by Twitter, and you’ll find all sorts of content, though very little of it is related to gaming. Periscope has nearly two million active users, making one of the biggest live streaming sites on the web.

16. Twitch is home to an average of 1.1 million concurrent viewers across the streams on their platform.

It’s easy to see how so many hours of live stream viewership have accumulated over time, with Twitch having over a million viewers all watching at any given time. This goes up and down, but is still quite high even in the lowest periods.

The tools which people use to watch their live streams can vary a lot. Smartphones are the most popular, followed by computers and TVs, though you can also find other devices suitable for this task.

17. More than half of live stream viewers watch their streams through social media apps.

Apps are a great tool when you’re consuming a live stream. Facebook, Instagram, Twitch, and a host of other streaming platforms have their own apps, and more than half of stream viewers are using social media apps to watch the content they enjoy.

Live streaming is a rapidly growing industry, playing host to countless content creators, and billions of hours of footage. As time goes on, this market is only getting larger, and a lot of people want to get in on the action.

18. According to Wallet Hacks, the most lucrative Twitch streamer in 2020 is likely to be CriticalRole, making an estimated $37 million.

As you might expect, many streamers don’t like to talk about what they earn, and sites like Twitch try to keep this area quiet. It’s expected that CriticalRole will be the most lucrative Twitch streamer in 2020, and they could earn as much as $37 million from ad revenue, merchandise sales, and corporate partnerships.

There are a lot of users making almost as much as CriticalRole, and companies are willing to pay huge amounts to get their screen time. It’s estimated that this sector was worth $13 billion as of last year, but this number is climbing.

20. According to live streaming video growth rate statistics, live streaming is expected to penetrate more than 16.9% of the online user market by 2024.

If there are still 4.48 billion web users at that point, there will be more than 757 million people watching live streams. But this figure will probably be higher.

21. Newzoo predicts that esports live streaming will have a growth rate of around 14% by 2021.

esports have gained huge popularity over the last few years, with some competitions having prize pools worth millions of dollars. Newzoo predicts that this market will continue to grow at a staggering growth rate for the foreseeable future.

This will dwarf things like email transmission, online purchases, and other basic online tasks, forcing internet service providers to improve the bandwidth they offer.

Live streaming isn’t set to die out any time soon. This market will continue to grow and expand as users explore new ideas and ways of making their content. Today’s live video streaming statistics could look very different in just a few short years.

Whether you want to use live streams to improve your business, make a career as a streamer, or simply enjoy this sort of content, learning more about the market can be an interesting experience.

The future is bright for live streaming, and it’s exciting to see where this trend might go.