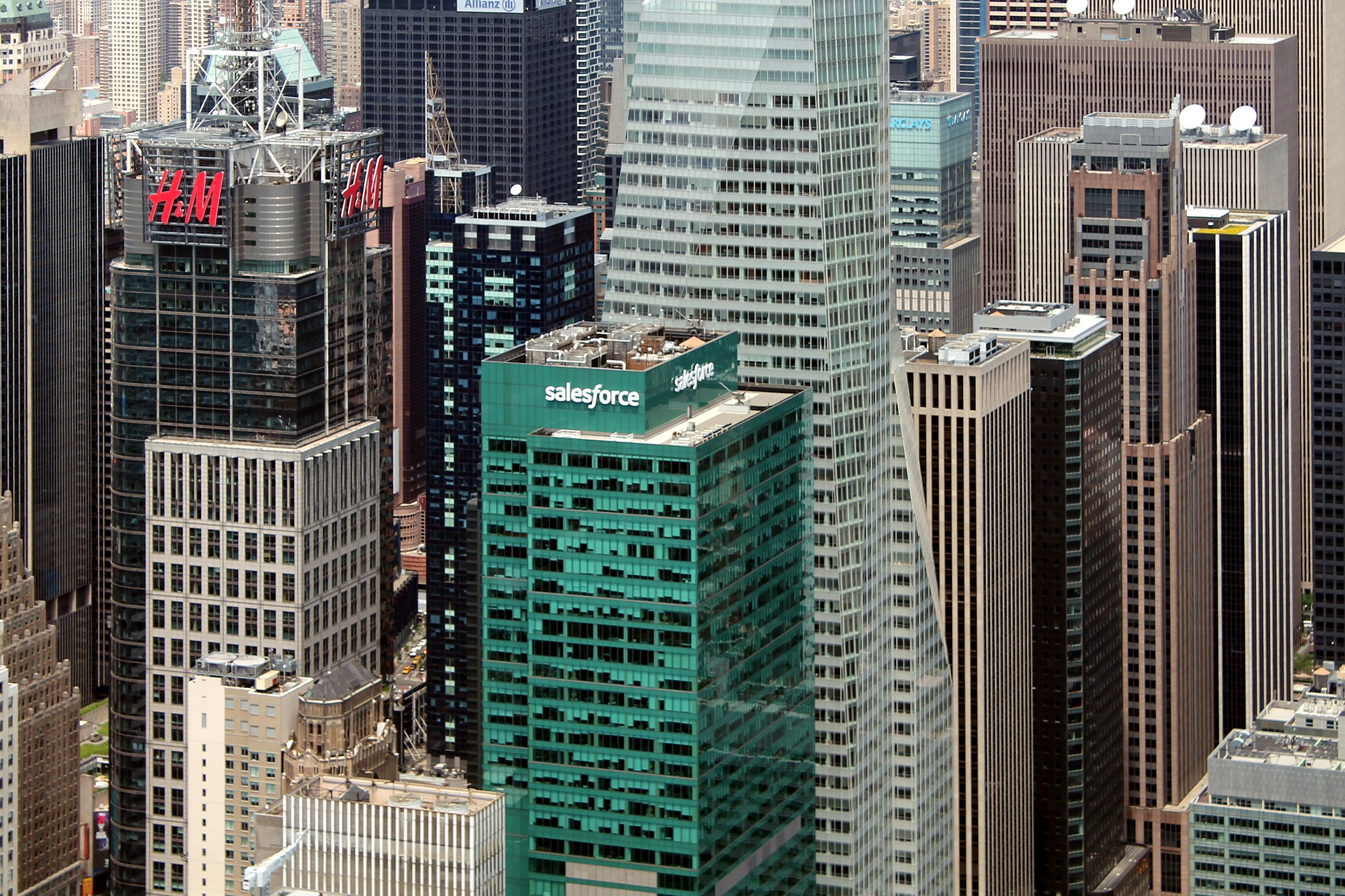 27 Stunning Salesforce Statistics You Should Know in 2020

CRM platforms are becoming vital to small and big businesses alike. They make it easier to take care of everything from commerce to marketing in one place. And that’s why businesses love them.

Among the biggest and most successful customer relationship management solutions companies is Salesforce. They offer an integrated platform that helps business users to understand their customers better and achieve more going forward.

To help us understand more about the success of the company and what this means for the wider industry, we’re going to delve into some of the most interesting and pertinent Salesforce statistics.

1. Salesforce has a 20% share of the overall CRM market.

The CRM market is growing, and Salesforce is one of the factors driving that growth. You can see that by the dominance the company has. The market is relatively diverse, with lots of companies operating within it and competing for customers. Still, Salesforce has one-fifth of the market share, making it the biggest company out there.

How many users does salesforce have?

This is what makes the company the biggest and most dominant in the industry. Customer growth is steady, and the company expects to pull in more and more paying customers in the years ahead as it implements a robust growth strategy.

4. 31% of Salesforce revenue is generated by Service Cloud sales.

Service Cloud is one of the most important aspects of the Salesforce business model, and this can be seen in the revenue figures released by the company. In total, close to one-third of Salesforce come from Service Cloud sales. As more companies embrace cloud technology, that figure is likely to rise.

Businesses are now spending more money on CRMs, and most of this spending is going towards Software as a Service (Saas). This is impacting all businesses in the industry, including Salesforce. Its SaaS products are considered among the best in the industry, which explains the company’s dominance.

Salesforce CRM revenue is growing steadily as the company makes its mark on the industry. At the moment, the annual sales figures show that CRM revenue for the company is growing at a whopping 23.2% annually. That’s a steep rise and one that the company will be looking to sustain as it moves forward and offer new products to customers.

Adobe is still the biggest player in the market when it comes to CRM software that’s specifically focused on marketing. But that gap is closing. At the moment, sales force as a market share of 11.7% in this niche, with Adobe 7.3% ahead of them. Adobe is a huge company with a lot to offer, but Salesforce is clearly looking to catch it.

8. According to Salesforce usage statistics, 58% of Salesforce customers say they have plans to integrate additional Salesforce clouds.

One of the major advantages Salesforce has going for it is the way in which different clouds and services can be integrated seamlessly depending on the needs of the user. A recent survey of customers found that over half of them were making plans to integrate additional Salesforce clouds. That’s very positive news for the company.

10. Customer satisfaction rises by 35% after companies switch to Salesforce.

It’s a very big deal the vast majority of Fortune 100 companies now use at least one Salesforce application. It shows that the biggest and most successful players in the business world see Salesforce as the best option for them. That can be used to leverage further interest in the company’s products and boost Salesforce revenue growth.

Customer service employees tend to become more productive when they use Salesforce products, too. As we’ve already established, customer service and satisfaction matter a lot. Figures suggest a productivity rise of around one-third when clients use the service, which is a pretty big deal. It helps retain customers and achieve more for them.

13. Sales productivity rises by 44% in total after using Salesforce.

14. 71% of Salesforce customers use apps from the AppExchange.

15. The Salesforce Partner Ecosystem makes $5.18 for every $1 made by Salesforce.

16. The Salesforce Ecosystem is four times bigger than Salesforce.

17. According to Salesforce statistics, Salesforce and its Partner Ecosystem will be responsible for the creation of 3.3 million new jobs by 2022.

Part of what makes Salesforce and its huge Partner Ecosystem so important right now is the rate at which it’s creating new jobs and new opportunities. By 2022, it’s expected that Salesforce alongside its wider ecosystem will be responsible for creating a total of 3.3 million new jobs around the world. That’s quite an astonishing number of jobs created.

The revenue stats for Salesforce in 2019 were very impressive indeed. That’s why it’s become the biggest and most dominant company offering CRM products to businesses around the world. Last year was its most successful year on record, and the company is displaying steady and continued growth.

19. Salesforce revenue in 2019 was ten times higher than a decade ago.

One thing we can’t ignore is the massive rate of growth experienced by Salesforce over the last decade. Compared to this time 10 years ago, Salesforce’s revenue numbers are a whopping 10 times higher. The company has grown by leaps and bounds and managed to translate that into very impressive revenue numbers indeed.

20. Over 3000 apps have been deployed on the Salesforce AppExchange.

This should give you a clear picture of how many options and possibilities there are out there for Salesforce customers to take advantage of. There’s an app to meet just about every need out there.

21. Those apps have been downloaded over 5 million times.

Those 3000 apps have been downloaded an incredible five million times, and that number is rising all the time. It proves that the AppExchange offers genuine quality to users and provides businesses with solutions that, in many cases, they simply can’t find anywhere else. As the AppExchange grows, the number of apps and downloads will only increase, too.

22. Salesforce has paid for $128 million worth of grants, Salesforce statistics reveal.

One of the things that make Salesforce stand out is the way in which it uses money to fund educational programs and to offer grants, particularly in the field of computer science. It means that many of the next generation of experts will have their learning funded by the company thanks to its donations.

Another part of the Salesforce philanthropic approach is its 1/1/1 model. It means that 1% of its revenue, 1% of its resources and 1% of its employees’ time is dedicated to giving back to the community and other charitable causes. It’s a big step in corporate philanthropy that the company has been taking for a number of years now, which in turn helps boost Salesforce growth trends.

Another issue that Salesforce takes seriously is the problem of the gender pay gap. They make sure that men and women are paid equally for the work they do. That’s why the company spent a total of $3 million on closing this gap and remains committed to ensuring equality throughout their business structures going forward.

A survey found that the vast majority of Salesforce employees feel appreciated at work. It’s one of the many signs out there that suggest Salesforce is a great company to work for. And this is something that shouldn’t be overlooked. Lots of people want to use companies that have good reputations and this is one of the ways in which Salesforce has cultivated a great one. And a great reputation has affected positively the Salesforce market cap.

In total, businesses now spend a mind-blowing $48.2 billion a year on CRM software. And that huge sum is only going to increase as more businesses harness the power and see the value of CRMs. There’s still a lot of room for growth in the US and around the world when it comes to the use of CRM software. Salesforce will want to be at the forefront of that.

How many employees does salesforce have?

And that’s not all:

As we mentioned above, millions of others have jobs thanks to the wide ecosystem created by Salesforce. The company has increased its workforce by about 10,000 people over the last couple of years and it will likely grow more as the business and the wider CRM market grows too.

And on that note:

The company is a force to be reckoned with in the world of CRM platforms. It’s also a force for good in the business world, as it tries to reduce the gender pay gap, give back to the community, and offer research and study grants to bright young people.